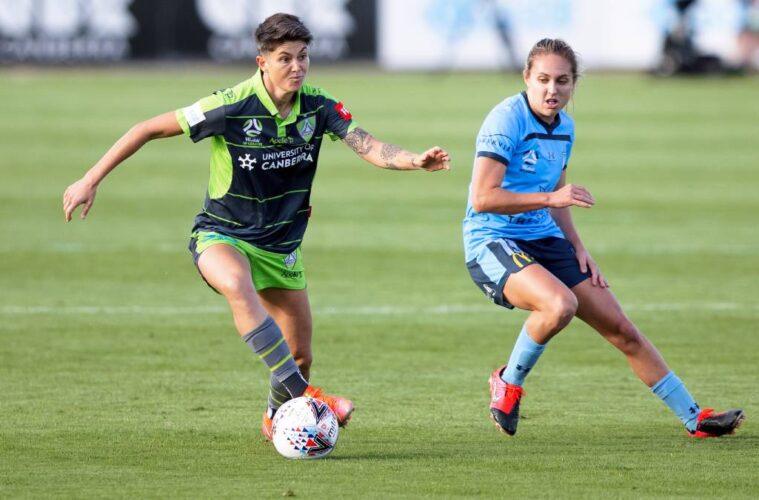 Friday night’s W-League stalemate between Canberra United and Sydney FC has left the door ajar for Melbourne Victory to haul in the Premiers Plate from fifth, if they can take three points from Perth tomorrow and a further three from the Sky Blues on Wednesday.

Currently outside the finals positions in fifth (20 points), the Victory are expected to surpass Adelaide (22) by accounting for a toothless Glory side that have managed a solitary point from eleven matches this season.

“I think it’s pretty well assured the Victory will get the three points against Perth because of all the various challenges Perth have had to go through”, The Guardian’s Sam Lewis told Box2Box.

“With border closures and late squad announcements, they haven’t hit their straps at all.”

That would set up a Big Blue regular season finale on Wednesday evening at Cromer Park, the clash having been rescheduled from last week due to New South Wales’ deluge.

With Sydney’s defensive woes compounded with the recent loss of Ellie Brush to a knee injury, Lewis feels that despite likely needing only a point to seal the Plate on Wednesday, they’d be wise to attack.

“It does feel like the wheels are starting to fall off this Sydney side. Losing Brush was the latest in a string of injuries that they’ve had defensively…the last couple of games they haven’t been playing with their two first choice centre-backs.”

“In saying that I think they have so much quality going forward it almost papers over the defensive cracks… It could be a case of simply having to outscore the other sides in the race to the finals and potentially to a Championship as well.”

Should Victory fail to take all three against Perth there is a slim possibility Brisbane Roar can take the Plate, provided they account for the lowly Jets tomorrow.

That match will be the final assignment for experienced pair Clare Polkinghorne and Emily Gielnik, who will depart on the eve of the finals to take up deals with Swedish side Vittsjö.

Lewis explained that while it’s no doubt disappointing for the Roar, the benefits for the pair are significant.

“The women’s transfer windows fell in such a way with the W-League season that the only opportunities these women had to go overseas was during the season, because the W-League was pushed back a month.”

“If they [don’t go now] then for one, they’re not able to be is the shop window for Tony Gustavsson and the Matildas, and two, they aren’t able to secure a more long-term contract for their own careers at club level.”

“I think [Brisbane] are probably actually encouraging their players to take these opportunities because they want what’s best for them as individual players and people.”