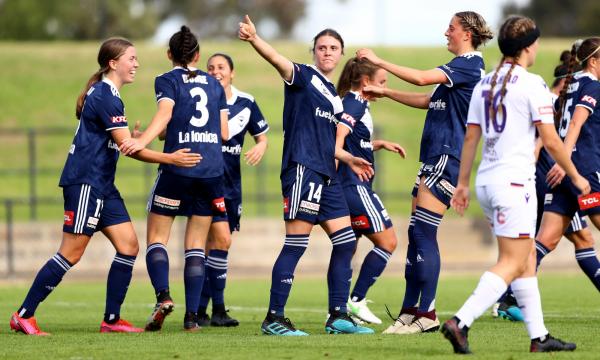 AYRES OUT TO CAP BREAKOUT CAMPAIGN WITH CHAMPIONSHIP

When the W-League campaign kicked off in late December, the doomsayers were in full cry. The security and prestige offered by the accelerating European scene meant many Matildas wouldn’t be returning home, and season predictions centred on a decline in quality and lack of star power.

Fast-forward to Grand Final week, and those voices haven’t been heard in months. With those departures came opportunities, which Melbourne Victory’s Melina Ayres and her generation-next peers have taken with both hands.

“It’s just a really exciting time with the World Cup on the horizon, and this season of W-League where a lot of my age group have come out of their shells and made headlines rather than the overseas internationals”, Ayres told Box2Box.

“The opportunity of having no internationals has really allowed my age group to get a go and show everyone what we can do.”

Ayres’ semi-final hat trick in last week’s 6-2 demolition of Brisbane Roar took her goal tally to eight for the season, which has been supplemented by a healthy five assists.

Heading into Sunday’s Grand Final, she credited the long-term support and pressure provided by manager Jeff Hopkins for her growth from bit-part contributor to attacking lynchpin.

“When I first moved over [Jeff] got a few of us young ones like Mindy Barbieri, Kyra Cooney-Cross, and he really was pushing us to push for the starting spots against some pretty good internationals.”

“He’s been my harshest critic and biggest supporter at the same time, and I think that’s really important in a coach. I’d rather have that positive and negative feedback so I’m learning.”

Outside the club, Ayres’ strong support network of family, friends and management includes esteemed strength and conditioning coach Loris Bertolacci, who has overseen a steep rise in her physical capacity.

“Looking at the GPS stats I can see I’m doing a lot more than last year and I guess it’s having an effect on the field. I’m getting in more key moments in the game because I can get there because I’m that bit fitter.”

“Having that really good support crew around me makes me want to do well for myself, and also see the smiles on their faces.”