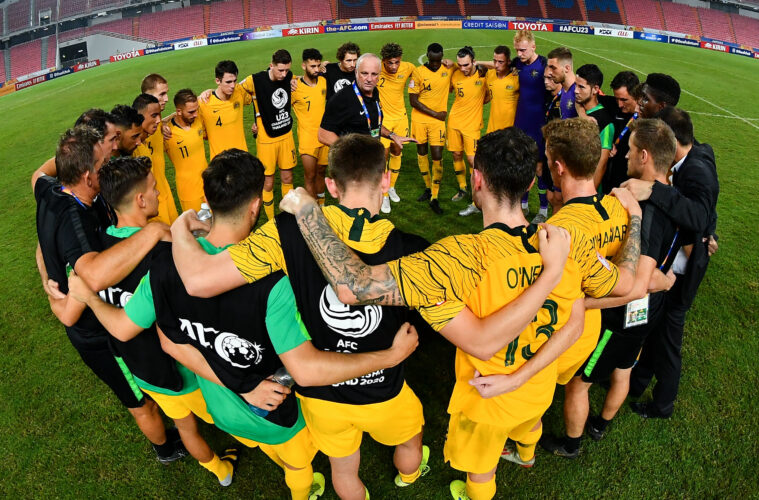 It’s might be nearing 16 months since Graham Arnold last managed a game, but the national team boss is on the verge of the most important months of his managerial career; the dual task of the Socceroos World Cup Qualifiers in Kuwait, followed by the Olyroos Olympic campaign.

The Socceroos haven’t played a match since November 2019, and with four games inside twelve days scheduled from June 3rd, the task would loom as a major challenge at the best of times.

Add in the fact that temperatures in Kuwait are expected to rise towards 50° Celsius, and even the most ardent Socceroos would have concerns. They’re concerns Arnold has no time for.

“When you talk about the conditions, that’s an excuse, because the other nations have to put up with it. I’ve already put a ban on the word that starts with ‘h’ and ends in ‘t”, Arnold laughed to Box2Box.

“I didn’t expect when I first took over this job we’d be playing seven of our first eight World Cup qualifiers away from home, but it is what it is. We just get on with it.”

The Kuwait fixtures will coincide with the A-League finals, and Arnold’s decision to call upon a bumper squad had the potential to put noses out of joint back home, with players such as Jamie Maclaren and Rhyan Grant to be absent from their clubs when needed most.

It’s a situation Arnold was on the receiving end of during his years coaching in the A-League, but one he feels he’s managed to placate.

“For me the most important thing was the communication to the coaches around this. The coaches, the clubs, Greg O’Rourke, and the APL with Danny Townsend and Simon Pearce, they’re all onside that whoever is picked for the Socceroos, it’s an honour for the club that the player gets picked.”

“Obviously it’s important I take extra players for two reasons. One is that we have four games with very short turnarounds. Also…with the risk of Covid, if half a dozen players go down, we’re in trouble.”

“This year especially you’ve got eleven out of twelve coaches that are Australian. Most of them played for the Socceroos, so they’ve been super supportive.”

Perhaps an element of this support came from Arnold’s decision to spare those clubs their Olyroos candidates for the finals, with a training camp to be held for July’s Olympics during that period.

That camp will now include only those based abroad, allowing domestic players to play for their clubs, challenge for silverware… and avoid arduous stints in hotel rooms.

“For me it was about minimal quarantine, because I believe if a player gets put in quarantine before they have to perform it’s always going to be tough on their mental health.”

“I felt instead of taking the boys away…and them missing the finals series, they would have missed nearly six games. Also to put them back into quarantine before they come back… they would lose physical fitness and probably the enjoyment of going to the Olympics.”

It seems and age ago that Arnold’s Olyroos defied the odds to qualify for Tokyo in January 2020, and he’ll be making no apologies if those central to that success fail to make the cut.

However he was just as definitive that they wouldn’t be making way for overage players, of which Arnold can call upon three, with that only to be the case if totally necessary.

“Nothing was promised to anybody. It’s down to form; it’s down to performance.
There’s been a lot more players come on the map over the last eight-nine months, putting in great performances to break into the Olympic squad.”

“I still reflect back to 2008 when we played Argentina and they had a frontline of [Angel] Di Maria, [Sergio] Aguero and Lionel Messi, with Riquelme at number 10. We lost 1-0 in the 78th minute, the boys played out of their skin.”

“When you bump into players that were there that night, they still talk about it. So it’s a great opportunity for the group of players, but also the individuals to take themselves to another level.”