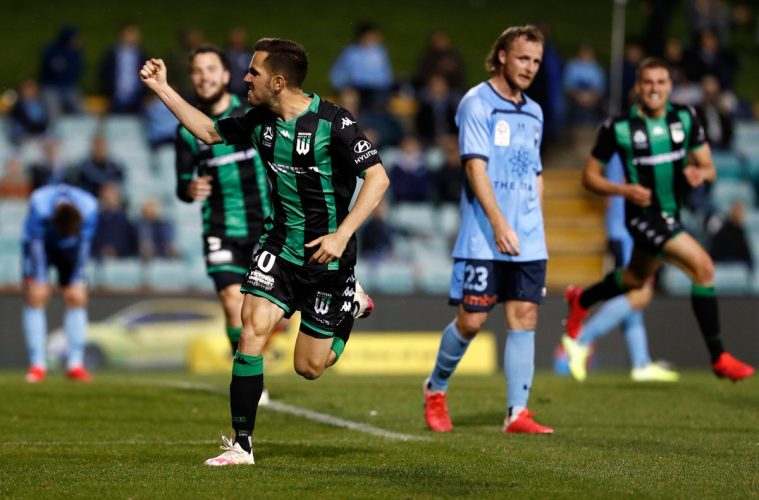 Western United will make their A-League finals debut on Sunday evening, facing Brisbane Roar in a cut-throat clash at Parramatta.

Having won four of their six matches since the competition’s resumption, United will hit the finals in form, and with genuine ambition of going all the way.

Of the four sides requiring three wins to lift the toilet seat, United look the most likely; attacking weapons in Diamanti and Burgess, finals experience in Durante and Berisha, and solidity in Kurto and Steven Lustica, see them the most rounded of the teams placed 3-6.

“It’s a massive achievement for the club to get into the finals in its first season. We’re all very proud of that”, Lustica told Box2Box.

“The group’s gelling well. The head coach Mark Rudan and all the boys, we’re all on par, and we’ve all got a clear goal of what we want to achieve this year.”

Lustica has had a significant if understated impact since signing from Uzbeki side Qizilqum Zarafshon in February, his dependable midfield work ensuring the side aren’t suffering from Panagiotis Kone’s departure.

Reward came for Lustica as he hit the winner against Sydney last week, a confidence-boosting win notable for the side’s reliance on youngsters.

“It was great to get on the scoresheet against Sydney, and to get the winner…a lot of the young boys came on, a few of them started, so it was great to see them put in a great performance.”

“It’s very positive to see so many youngsters coming through and to have the confidence to be able to play them in these big games.”